Zilje is a settlement above the left bank of the Kolpa River in the Municipality of Črnomelj in the White Carniola area of southeastern Slovenia. The area is part of the traditional region of Lower Carniola and is now included in the Southeast Slovenia statistical region.

The church of St. Anton the Abbot (or Hermit) was not documented in the List of churches by archdeaconate in the Diocese of Zagreb in 1334. The earliest constructions of other churches with patron St. Anton in central Europe were in the 14th century. So, it is likely the church in Zilje was built in the late 14th century. The village of Zilje, therefore, must have existed before this, as a hamlet.

The church of St. Anton the Abbot (or Hermit) is first mentioned in 1526 in the Inventarium ober die kürchen Cleinodien in ganzen Land Crain (an inventory of churches and sacral objects in Carniola).  At this time, the church had no association and the one chalice it had was taken by the Turks. This is also, then, the earliest definite account of the existence of the village of Zilje.

The first outright mention of the village by name Syll comes in the Urbarium des Schloss Weinitz an der Kulpp (Urbarium of the Dominion of Vinica on the Kolpa) in 1674. Zilje at the time was the administrative centre that encompassed the village of Zilje and the hamlets of Balkovci, Pavlini and Dejani. The Urbarium tells us a great deal about the village, it’s people and the area at this time. In 1674 there were 3 mills between Srednje Zilje and Dejani (one in Srednje Zilje jointly owned by Ive and Jakob Cvetaš [Zwitaschitsch], one in Pavlini owned by a Balkovec, and one in Dejani also owned by a Balkovec). There was also good fishing in the Kolpa between Učakovci and Dejani. 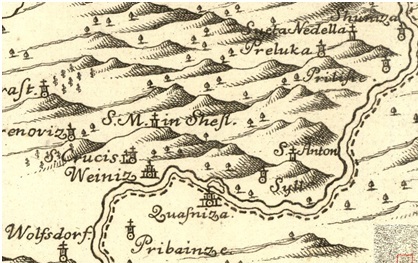 Johann Weichard Valvasor in his work Die Ehre dess Hertzogthums Crain from 1689 indicates there was a guard tower built south of the village of Zilje.

The church in Zilje was first documented in 1753 with the new patron St. Antony of Padua, and was remodeled at that time in the Baroque style. In 1888 it underwent a major rebuilding and the main altar dates also to this time.

In 1787, the village of Zilje was transferred to the new lokalija of Preloka, administered under the Parish of Vinica, but semi-autonomous.

The administrative area of Zilje continued to include the hamlets of Balkovci, Pavlini and Dejani until the late 1700s, when the new gemeinde (community) of Balkovci was created under the Josephian Cadastre in 1787.  This was the first cadastre to deliniate gemeinden. This is evident in changes of house numbering around this time – what was “Zilje 1“ became “Balkovci 1“.

Continue onward to explore the history of the People of Zilje.